Use the Kaleido Swap service to securely exchange tokenized assets with other account owners in your environment. The service provides a convenient interface that allows for any member with the service deployed to act as their own market maker or transaction initiator by offering a designated amount of liquidity (one or more tokens) to a specified counterpart. Under the covers the swap service leverages an underlying hash time locked contract (HTLC) as an escrow, which provides security and atomicity for any proposed token swaps. Counterparts to proposed swaps can subsequently react to the proffered liquidity by injecting tokenized assets under their control into the HTLC. If the trade initiator is happy with the counter-offer, they can withdraw the asset(s) and unlock the HTLC for the counterpart to receive the initially proposed liquidity.

The flow takes place as follows:

NOTE: Swaps are multi-part and time sensitive. As such, Kaleido recommends an out-of-band agreement on token transfers prior to locking assets into the HTLC. This helps with coordination and adds assurances for the successful completion of the transaction.

Walk through of a transfer

The environment looks as follows: 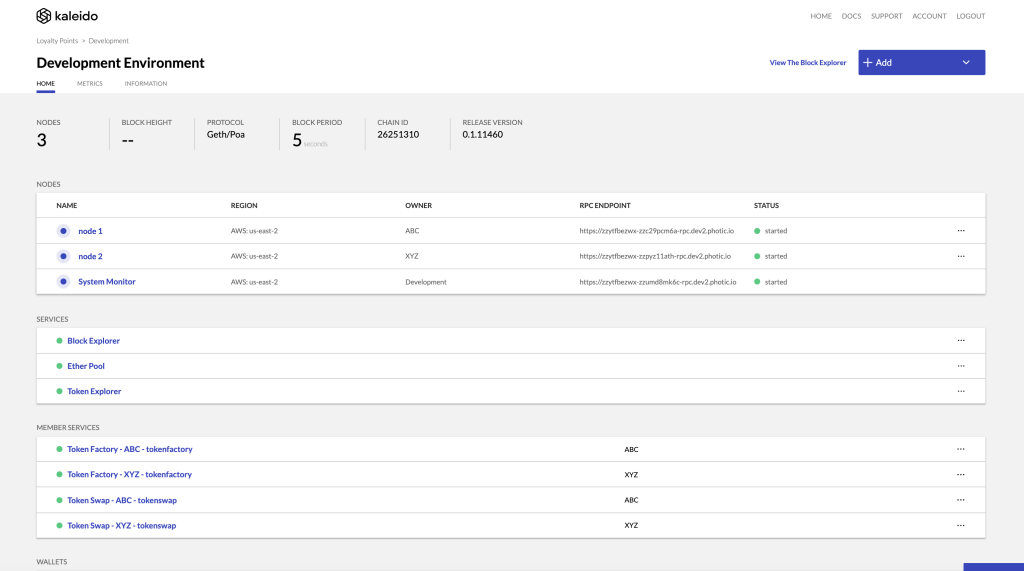 The default user account on ABC-owned node 1 owns 1000 tokens in the ACME contract: 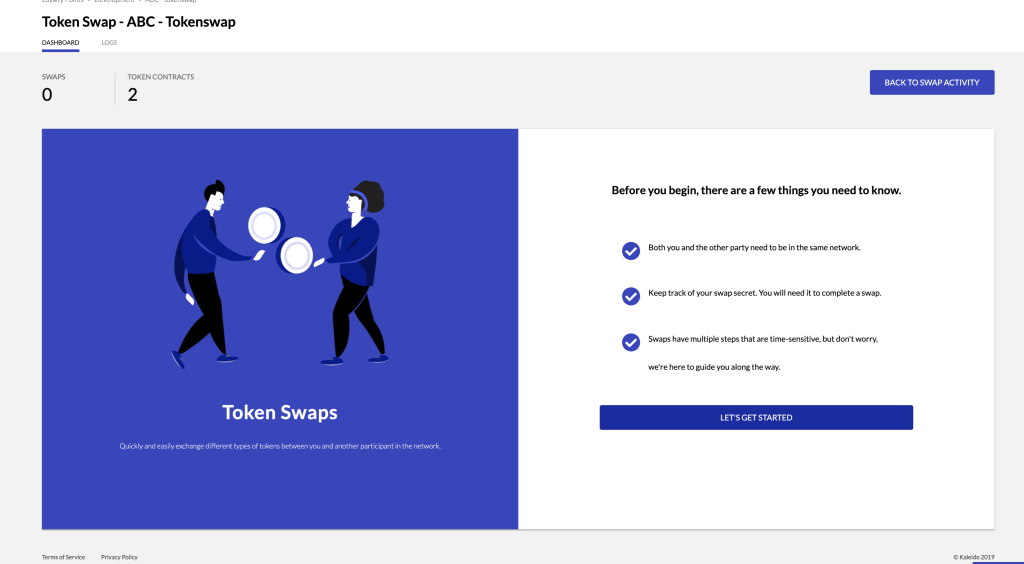 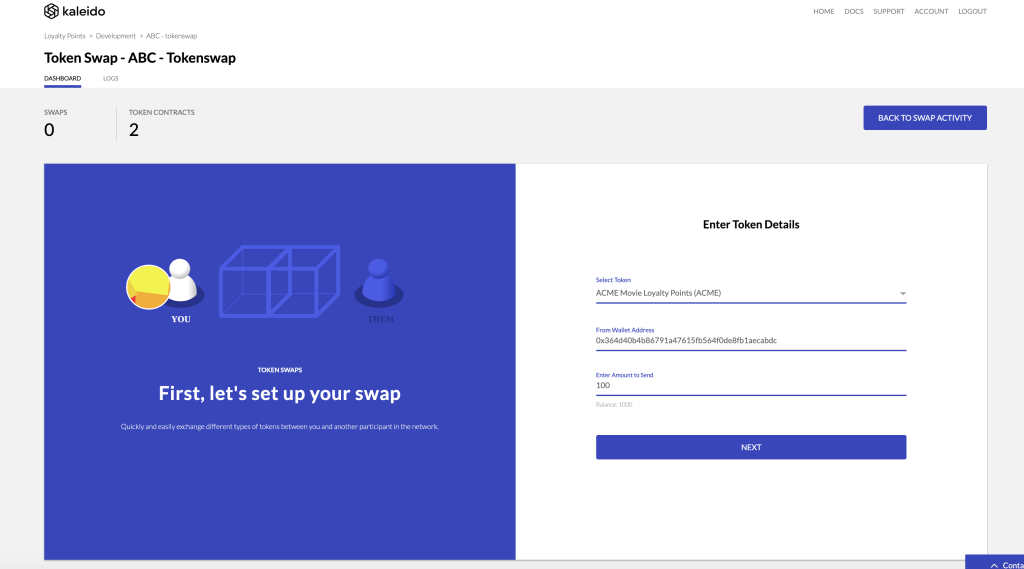 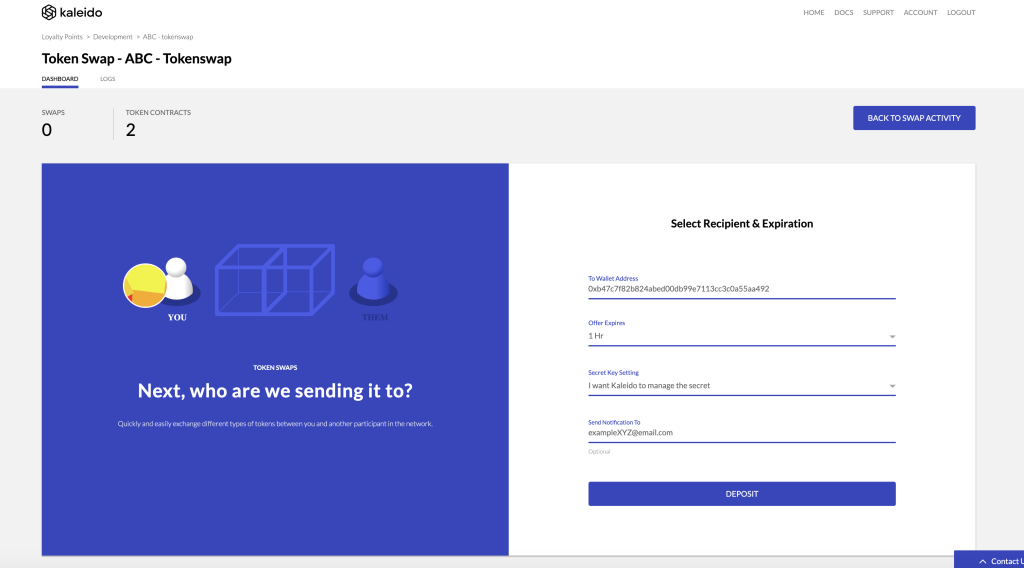 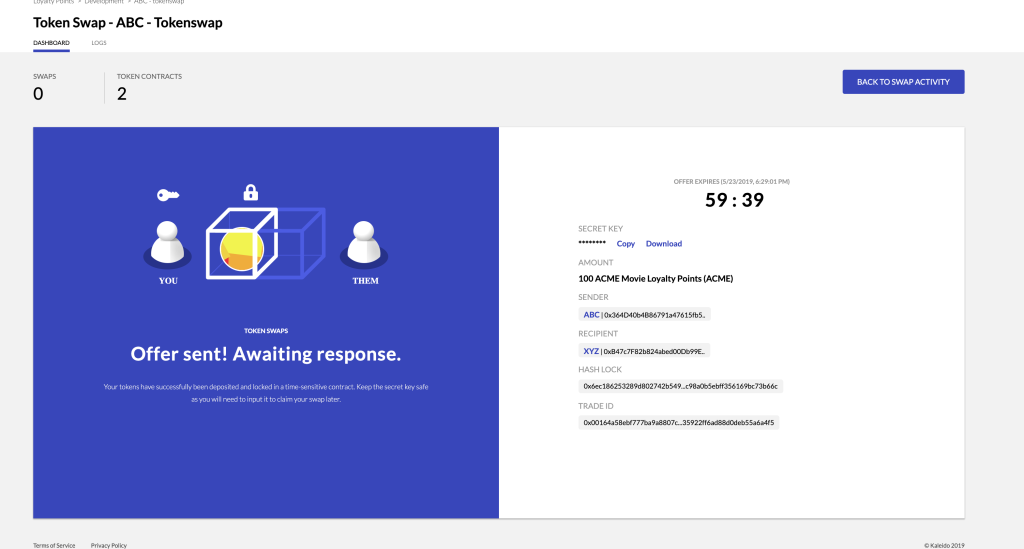 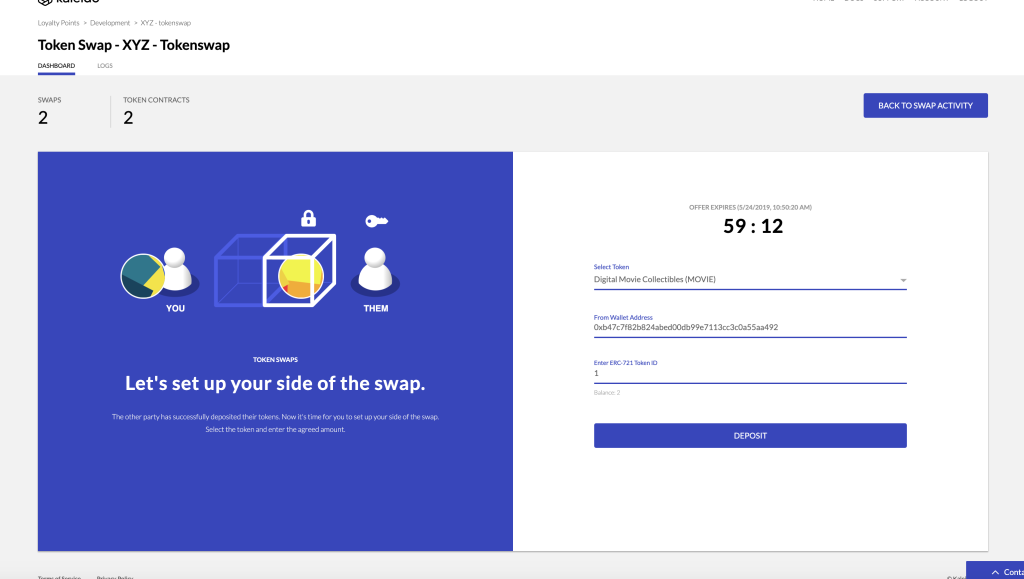 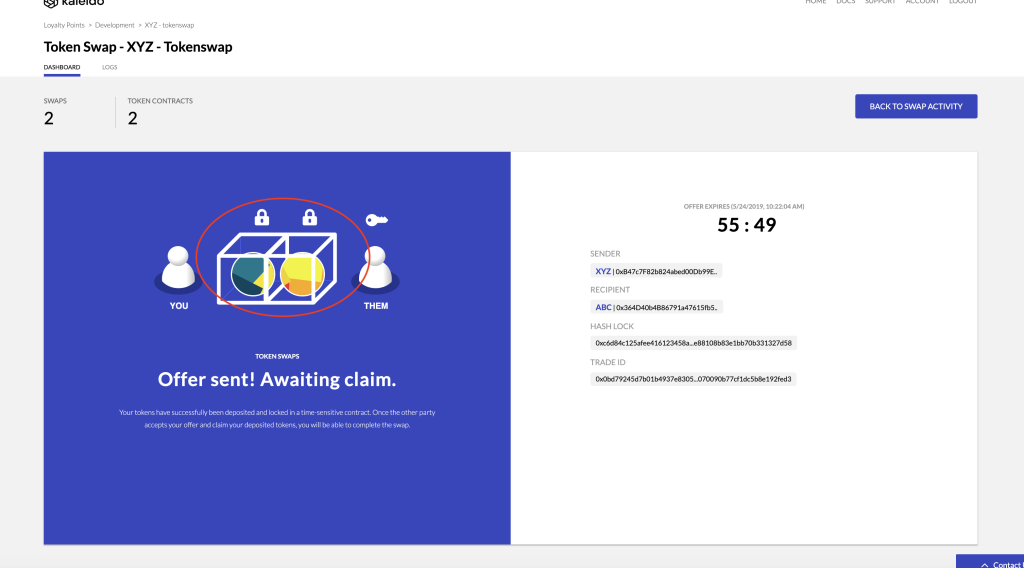 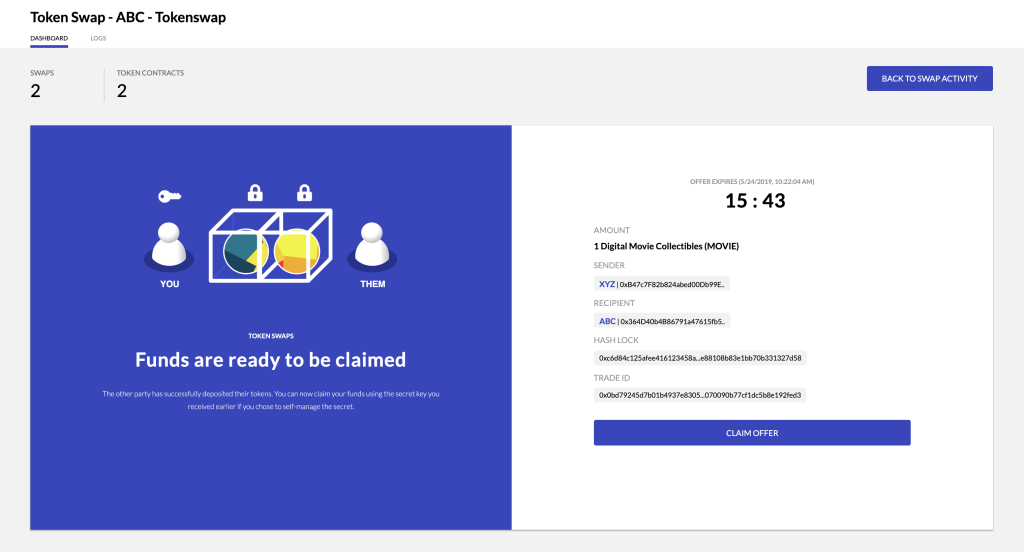 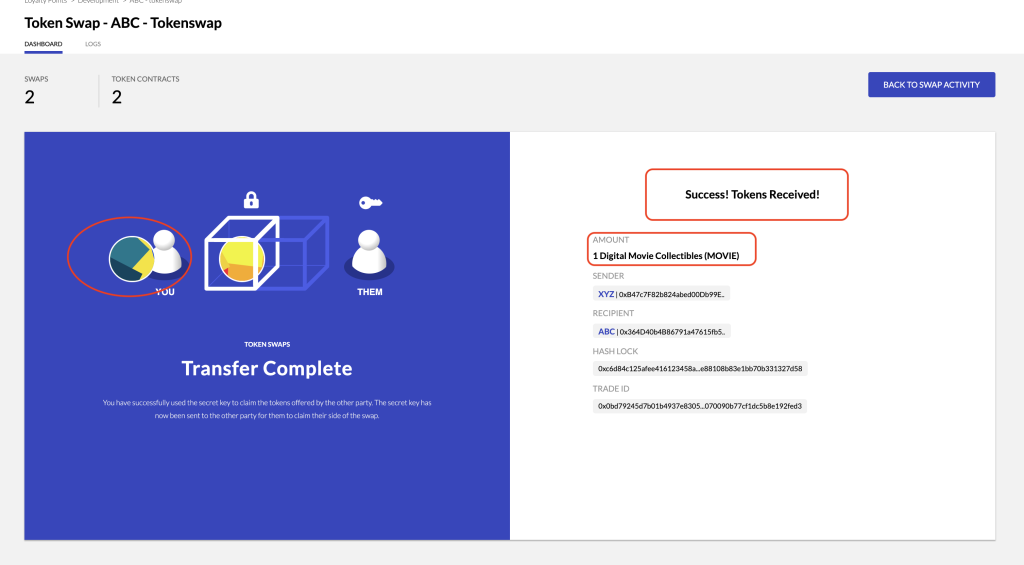 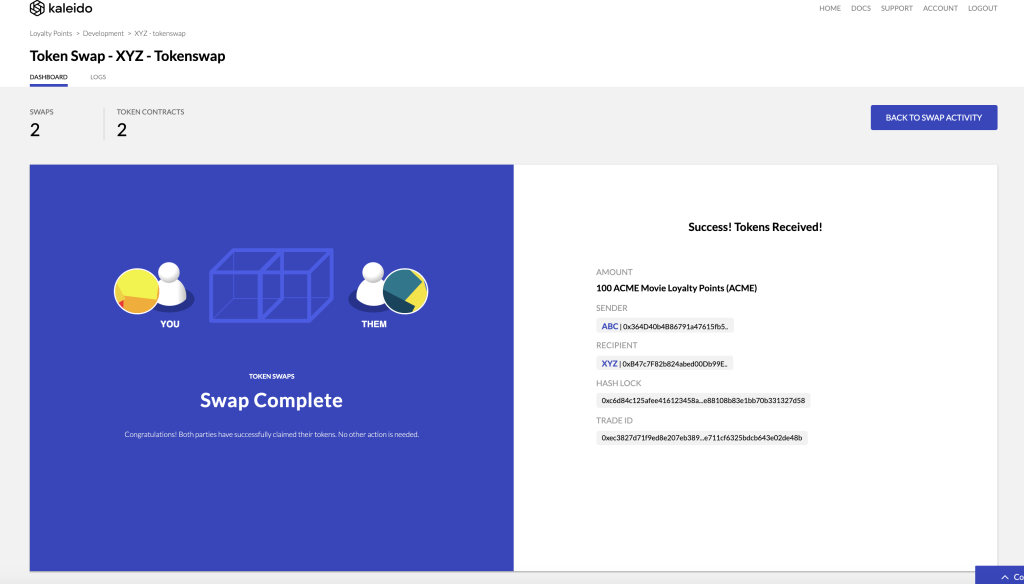 This sample made use of the default node user accounts for the sake of readability and simplicity. In a real world swap it’s likely that an organization would utilize alternate wallet addresses in order to logically partition assets across different accounts. The Wallet service can be used to create additional signing accounts and these addresses can be specified by using the Signing Account dropdown to designate which address will sign transactions and ultimately own assets. For more information on the Wallet service and account creation, please refer to the Managed Wallet documentation.